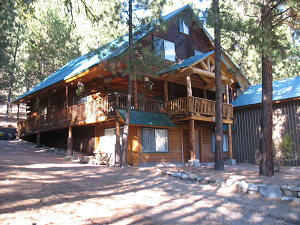 We have been enjoying this area since before we were married. (That was shortly after the crust of the earth had cooled according to our children. . .) We have another cabin just two doors down (also for rent on VRBO) where we have been coming for a respite from the world for over 30 years. We have lived in the Timbuktu region of west Africa (Mali), Mississippi, Texas, Utah, Idaho and Arizona. This is our favorite spot out of all the places we have lived or visited.Gary Freeman purchased this Cabin in 2011

We have set the cabin up with themed rooms and have named them. The main living area is the Four Seasons Retreat, the master bedroom is the Serenity Mountain, the family area is Native Voices, the second bedroom is Bohemian Wanderings and the loft sleeping area is called Wilderness Dreams.The two bedrooms have queen beds while the second bedroom also has a twin bed. Wilderness Dreams has three double beds and there are three hide-a-beds in the Native Voices area - one is a king, one is a queen and one is a twin.

This cabin is very cozy, nicely decorated and feels like a dream mountain retreat. Th..